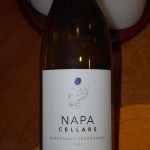 I’ve always been of the opinion that two things enhance the enjoyment of drinking wine, food and friends. The mission of my writing has always been to make wine more approachable, which includes helping my friends make well informed choices in their wine selections. When my twitter friend Richard Auffrey issued a call to action for wine writers to step up our game in 2011, my response was to post more relevant food and wine pairing to help you have a good time with wine.

A tweet from the folks at Food Network inspired a mid-week quick and easy meal of sauteed shrimp. Their idea was to saute shrimp with garlic, and deglaze the pan with Champagne. A simple enough idea, and one that included wine or Champagne, so I was quite excited. I knew I had a host of wines to pair with such a dish, so I prepared the following recipe:

1 pound medium shrimp, peeled and deveined
4 medium cloves of garlic, chopped
2-3 tablespoons of extra virgin olive oil
1/2 to 1 cup of Sparkling wine (you can use a California Sparkling Wine or Italian Prosecco, Cava, or a Champagne)

In a large saute pan, I heated the olive oil on medium for about 4 minutes, then added the chopped garlic to saute for about 3 to 5 minutes, stirring the entire time. I then added the cleaned shrimp, and sauteed them until pink, about 5 minutes. You want to ensure you don’t over cook the shrimp, or they’re rubbery. Cut one open and ensure the inside is pink and no longer the translucent white. Once they’re done, take them out of the pan and put them in a serving dish. Pour the sparkling wine into the pan, and deglaze, ensuring the crusty bits come off the bottom of the pan. Stir for about three minutes, as the wine will reduce and thicken, mixing nicely with the flavors in the pan. Pour over the shrimp, serve over pasta, rice or on it’s own, and pop a cork.

This dish could have gone with quite a few wine options, but I selected a bottle of Napa Cellars 2009 Chardonnay, which cost around $24. After giving the bottle a few minutes to open and breathe, the bouquet of ripe pears pops out of the glass, followed by a little creme brulee. There are even scents of sweet white floral mixed in with those pears, and it’s a great nose. The palate is light to medium body, and is a good mix of buttery and crisp. Some of the wine goes through malolactic fermentation, which will produce the buttery, heavy mouth feel in a white wine like chardonnay. However since not all of the wine went through “malo”, it retains some of the crispness chardonnay can show. There is good fruit, apples and pears, and spice right up front, with some nice toast, but not over done as you can find in “Over Oaked” chardonnay. There’s a lingering smokey spice flavor on the finish, but it’s warm and inviting, not overbearing.

There are some great examples of Napa chardonnay on the market, and I truly believe that this Napa Cellars 2009 Chardonny is one of them. Winemaker Joe Shirley, head winemaker since 2007, is a California native who’s doing some nice things at Napa Cellars. He worked at Sonoma Cutrer in the late 90′s, which almost typifies buttery California Chardonnay. At $24 for the Napa Cellars 2009 Chardonnay, it’s quite nice when compared to chardonnay in the same price range, such as Paraiso’s Chardonnay, which I also enjoy and have brought to various TV segments to recommend.

Don’t think that chardonnay only pairs with foods prepared with Shrimp. I love chardonnay with chicken, from baked to fried to roasted. As a matter of fact, this Napa Cellars Chardonnay sample came with a recipe for Chicken Saffron Brochettes with Spanish Chorizo. YUM, we’ll have to make that and discuss in the future! And of course, lobster, whether boiled and dipped in drawn butter, or in a lobster roll, is a natural pair for most California chardonnay. What is your favorite food and wine pairing with chardonnay? Leave a comment below, I’m dying to know.