The non-profit group Hospice du Rhone endeavors to educate about and promote the Rhone grape varietals. Rhone varietals include Grenach, Mouvedre, and today’s topic, Syrah, along with other lesser known grapes such as Bourboulenc and Camarese. Syrah is a grape that offers many expressions, from the peppery Shiraz you’ll find in Australia, to the round and fruit focused Syrah you’ll find in California. It’s a grape that takes on the characteristics of the terroir, the earth that the grapes come from, and will be different whether from France, California or Washington. A group of wine writers received four Washington Syrah samples from Hospice du Rhone, and taste the wines together, using twitter to discuss our notes. I fired up the grill, cooking some mild Italian sausage and some hamburgers, and set out to taste the first two of the four wines. 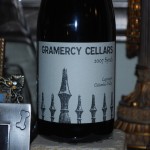 The first wine of the night was from Gramercy Cellars which was founded in 2005 by Master Sommelier Greg Harrington and his wife Pam. The 2007 Lagniappe Syrah is co-fermented with 2% Viognier, which will add floral notes to the wine, and is then aged 15 months in neutral French oak. It’s made with fruit sourced from neighboring vineyards in Columbia Valley, while their own two vineyards mature. Initially tight on the nose, displaying some “meaty berry” notes after about 30 minutes of air, the palate was subdued black fruit with some leather and pepper. However, paired with grilled Italian sausage, the wine began to shine, showing additional complexities including layers of mocha under the fruit. With food, the pepper finish eased and the berry and mocha flavors come through, and the wine became a well balanced accompaniment to the meal.

The team at Gramercy indeed specifically makes their wines with a food pairing focus, and I found it all too easy to enjoy another sip after a bite of grilled hamburger or sausage. At $38, the wine not only complimented the meal, but it stood up well the next day. On the second day, the Lagniappe Syrah’s bouquet opened a bit more, showing dark fruit on the nose. The palate seemed a bit rounder, with a jammy berry focus, similar to grabbing handfuls of fresh blackberries and shoving them in your mouth, until it overflows. The finish, however, retained it’s white pepper component and was still screaming for some food to help tame it. All in all a nice wine which is definitely made with food in mind. 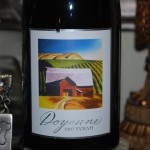 Next up was DeLille Cellars 2007 Doyenne Syrah from Yakima Valley, WA. This Syrah was blend with 2% Viognier as well, though aging and fermentation information were not available. The nose was not very fragrant after being open 45 minutes, and it could have decanted over an hour and a half to reach full potential. It had that “meaty fruit” bouquet, but nothing stood out as “wow”. The palate was dark fruit and cocoa, similar to the Gramercy, with a soft silky approach and a powerful finish. However, the Doyenne Syrah really screamed when paired with food. Sipping after a bite of the grilled sausage brought out a cascade of flavors, especially spicy chocolate.

The second night found the Doyenne still smooth and silky, as the wine opened up in the bottle. There were great blackberry and black raspberry flavors, with the oak showing a little bit on the finish. At $50, I would have a hard time just plunking this wine down on the table to sip on. However, with a meal, such as grilled meats of any sort, I wouldn’t hesitate a second to pop open this bottle! I’d like to see how this wine matures over 3-4 years, and the DeLille Cellars website has an aging chart for their wines, which noted this Syrah as a “Hold”.

Have you had a Syrah from Washington, or anywhere, that really stands out? Let us know about it, leave a comment below. Next up, we’ll talk about the other two Syrah we taste that evening, including one from Charles Smith, the Food and Wine 2009 Winemaker of the Year.