I’ve been drinking wine a long time. I’m from New York. Given those two statements, you’d think I’d be a well versed champion of Finger Lakes wines like Lenn Thompson. I’m going to say right now, up until this week, I had never tasted a wine from the NY state. I hereby apologize for that, and am quite grateful for the opportunity to try some very interesting wines from my home state. I was selected as one of a few wine bloggers to receive samples of 12 wines from the Finger Lakes area of New York. Lenn decided to select all Finger Lakes Rieslings, given the heat of summer and his desire to cool us off. With the help of Morgen McLaughlin from Finger Lakes Wine Country, our samples arrived and we were off to the tastings.

I invited a few friends over to taste and discuss the wines we were about to receive, the salesman with the wine distributor that Zsazsa and Company, Inc uses in South Florida, along with his girlfriend, as well as three of the four @Swirlgirls, the wine bloggers for the Palm Beach Post. We had very little education about the Finger Lakes wine region, and all of us had preconceived notions of what to expect. The Swirl Girls had just done a German and Alsace wine tasting, and were expecting wines similar to those. I too was expecting different tasting wines, perhaps a mix of New World Rieslings mashed up with German Kabinett and Spatlese Riesling. I won’t lament that I didn’t do my homework before tasting the wines, but I’ve learned that preconceived notions really don’t do any good. After really not enjoying the wines as much as I had hoped, and speaking with some Finger Lakes wine lovers, I tasted all 12 wines a second time the next night. With my new paradigm, I wanted to try them again to make sure I gave myself an opportunity to experience them without expecting Dr Loosen Dr L in each glass. Robin and I made a few appetizers, and our guests brought various dishes as well. We lined up the wines, and started our event. First up, Ravines Wine Cellars 2006 Riesling. 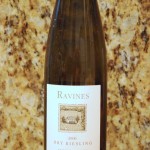 European Winemaker and Oenologist Morten Hallgren and his wife Lisa purchased the 17 acre parcel of land for Ravines in 2000, after working for Dr. Konstantin Frank’s Vinifera Wine Cellars for 6 years. The tasting room was opened in spring 2003, and they promptly won Best Dry Riesling in the 2003 World Riesling Cup and the Eastern International Wine Competition for their 2002 Dry Riesling. None of us read the bottle or description on their web page, and just tasted away.

In the glass, the Ravines Riesling 2006 ($16 retail 12.5% ABV) had a light pale yellow color with a nose of lemon zest. There was a little minerals and sharp notes in the bouquet as well. Upon taking the first sip, there was a bit of light citrus, and then a really big burst of it on the mid palate. This wine, and really most of the Rieslings we had this evening, had a tremendous amount of acidity. So much so, the reaction of most of the tasters was that it was a bit unbalanced. The finish is really long, and the citrus turns a bit grassy. Most of the tasters really didn’t prefer this wine, and I likened it to a Sancerre, with a lot of grapefruit, but not as balanced and polished. 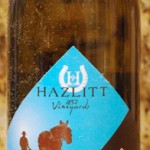 Next up we tasted the Hazlitt 1852 Vineyards Homestead Reserve Riesling 2008 ($18 retail 12% ABV). Founded by the late Jerry Hazlitt and his wife Elaine in 1984, the Hazlitt family has been involved in Viticulture for 151 years. Hazlitt wines have won multiple awards, and the Homestead Reserve Riesling has been awarded Silver in the LA International, Bronze in the San Francisco International, and a few gold and double gold awards.

On the first night of tasting, my notes were very brief. I noticed the bouquet had a bit of pear, there was a lot of lemon with grassy notes on the palate, and the finish just left you with a gripping acidity that overwhelmed your mouth. When I revisited the wine on the second night, I smelled a lemon poppy muffin in the glass, but the acidity was actually showing up and burning my nose. There was a light floral thing going on up front on the sip, sort of white flowers, that transitioned into nice stone fruit. Stone fruit, if you aren’t sure, resembles peaches, nectarines, etc. The finish still is so acidic that it leaves a harsh citrus flavor that wipes away the stone fruit. I do not want to give the impression this is a bad wine, however. You just need to strap yourself in for the acidity on it, and most of the others. This wine, along with one I’ll discuss later, was a favorite of Robin’s 25 year old assistant, who was happy to sample some of the remaining wines on the 3rd day.

After the first two wines, we all started trying some of the food we had prepared. We hoped the food would cut the acidity and perhaps soften the flavors up a bit. Remember, we didn’t understand that the terroir of Finger Lakes would bring flavors that Evan Dawson likens to “wrapping a river rock with a lime peel and taking a bite. Which, to me, is freaking wonderful.” All of the dishes went very nicely with all of the wines, from the Shrimp with Orzo made by Swirl Girl Sweet (Libby) to the shrimp satay sort of thing Joelle created, to mock Shortbread cookies with Cabot Hot Habanero cheese that we emulated. However, they didn’t change the experiences we had with the wines. And that isn’t a bad thing. We pressed on. 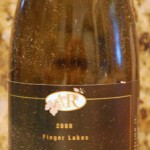 The next wine made most of the guests cringe when they sampled the bouquet on the first night. I implored them to let it open a bit, swirl, and see if the odor blew off. I felt it did, showing some fresh made margarita on the nose. It was off dry with medium acidity and body, showing ripe peaches. The finish was called “unsettling” on the first night, but not unpleasant. The Anthony Road Wine Company Semi-Dry Riesling comes in at about $15 retail and 12.6 ABV, and was not a crowd favorite. When I sampled it the second day, I noted it was a tad syrupy, but not overly so. The peaches and nectarines were dominant, but the acidity compared to the others was underwhelming. It was as if I would have liked to cut the acidity from the first two wines, and put them into this one.

Anthony Road Wine Company owners Ann and John Martini moved to the 100 acre parcel of land overlooking Seneca Lake in 1973. They opened the winery doors in 1990 with the 1989 vintage, and they produce a wide range of Finger Lakes wines. The 2007 Dry Riesling & 2008 Semi-Sweet Riesling won Gold at the Riverside International Wine Competition. I definitely think the wine opened up on the second day, and perhaps just needed to sit for a while on the first night. It was actually the 4th ranked wine by the wine distributor rep who was with us. 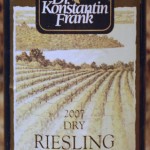 The next wine invoked a good bit of conversation, as Dr Konstantin Frank is credited for not just revolutionizing wine production in New York State and the East Coast, but also producing world class wines. As Lenn Thompson said, “How could you not include Dr Frank in a Finger Lakes Tasting.” The wine distributor was more than excited to discuss how Dr Frank revitalized the New York wine industry after his idea to graft European grape vines on local NY root stock allowed the more delicate grapes to grow in the harsher NY weather, to expand the options available to winemakers.

Of the four wines we had tasted so far during the evening, we all agreed Dr Frank 2007 Dry Riesling at $17 retail was the most enjoyable; the fruit, acidity, and minerality are all restrained, balanced, and elegant. While the finish was disappointing compared to the other elements of the wine, it was not bad, just not up to snuff. It was the second favorite wine of the entire night for our wine distributor guest. Tasting this wine the second night, the bouquet was tight, mostly yeasty scents coming through. The palate is medium weight, and some what elegant. There’s a decent bit of tree fruit here, with an underpinning of yeast, though it’s a bit light on the finish. You get a mixture of citrus and grass with tree fruit and yeast.

If you’ve made it this far, give yourself a hand; this has been a long post. I’ll write up another four of the 12 wines in the coming days. I’ll leave you with this though: Have an open mind and a wandering palate and try some Finger Lakes NY Rieslings when you can. They’re different than what you’d expect, but something you may thoroughly enjoy. Until next time, have a good time with wine!