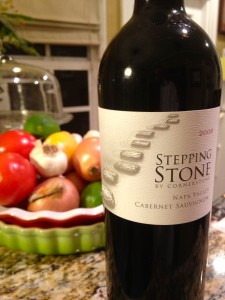 When people talk about Napa Valley wines, especially Cabernet Sauvignon, they often talk about lofty prices of hard to get wines like Screaming Eagle and Scarecrow. And while there are definitely great wines at lower prices in Napa, California, like Hartwell which can come in around $80, that is still above some people’s wine budget. That’s when a wine like the Stepping Stone 2008 Cabernet Sauvignon fits perfectly in your glass. It’s a great expression of Napa Cabernet Sauvignon, at a price that doesn’t make you feel like you just bought a whole vineyard.

Stepping Stone is the sister label to Cornerstone Cellars, a venture with managing partner Craig Camp and Drs. Michael Dragutsky and David Sloas who started the label in 1991. I had the chance to try the Cornerstone Cellars 2004 Howell Mountain Cab Sauv a year or so back. While I didn’t write up a review, I thought it was delicious, and I was quite sad I opened it when I did. I felt it could have aged for another 2-3 years, if not 10. So, when I was given a shot to try the 2008 Stepping Stone Cab Sauv, bottled in May 2010 after spending 18 months in 50% new French oak barrels and released 9 months after bottling in early 2011, I was quite excited. At just $35 a bottle, I believed we’d have a great Napa wine under $40 to talk about. 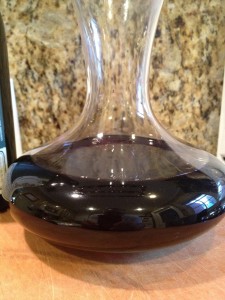 Get a Wine Decanter

First, a word about decanting, or just aerating wine. Do it. Stop being so impatient. It’s not rocket science, and will improve the taste of just about any red, and even some white wines you’ll drink.  If you don’t have a formal decanter, which my God, if you’re a regular wine drinker, get one, then just pop the cork, and pour out a smidge of wine into a glass. That will allow air to get into the neck of the bottle and start oxidizing the wine. I won’t get into why decanting works, just know you should. Some wines need more air than others to “open up”, and that part sort of IS rocket science. Just know that 10-20 minutes sitting and breathing is almost always the right thing to do.

Tasting the Stepping Stone 2008 Cabernet Sauvignon, the nose was a sweet cherry, with some notes of blueberry and brambles. Yes, I taste with my nose first. Some 80% of what things taste like are based on smell, so taking a nice sniff of the wine will start producing taste patterns. The palate was big fruit up front, dark cherry and blueberry, followed by a nice earthiness. I let this decant for about an hour after my initial taste. I noticed the mouthfeel was full but silky, round flavors of dark cherry, mocha and a beautiful herb and forest floor note. There were fine, well integrated tannin, and this wine was just a pleasure to sip. Even at 14.9% ABV, there was no heat on the finish, and it was a well made wine. At $35, I’d say it was worth every penny. Tim Lemke of Cheap Wine Ratings wrote up a number of the Stepping Stone wines, and agrees the Cabernet Sauvignon is a good wine. 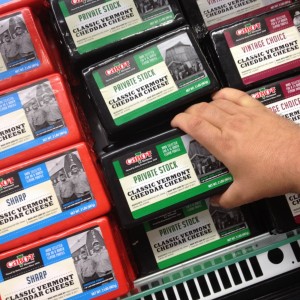 Food pairings for this Cabernet Sauvignon would be the typical red meat such as steaks, as well as lamb or veal. We enjoyed it with some amazing Cabot Coop Cheddar cheese, and think it’s a perfect pairing. The two dance together in a delicious harmony. The Stepping Stones 2008 Cabernet Sauvignon is a great wine on it’s own however, and you can enjoy it just sipping on a glass with friends. I know I did.