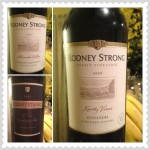 With Valentine’s Day approaching, wine and chocolate will be bought and consumed in astounding numbers. About 58 million pounds of chocolate will be purchased, and I’m sure more than a few bottles of wine will wash that down. For the past 23 years, the Rodney Strong Wine & Chocolate Fantasy event has paired wines with gourmet chocolate, inviting guests to revel in the sensory delight. The Rodney Strong twitter team asked if I’d participate in a Twitter Tastelive event, pairing three of their red wines with chocolate, and tweeting about it. I admitted that my personal palate preferred food to sweets when pairing wines, but I’d love to challenge my palate. 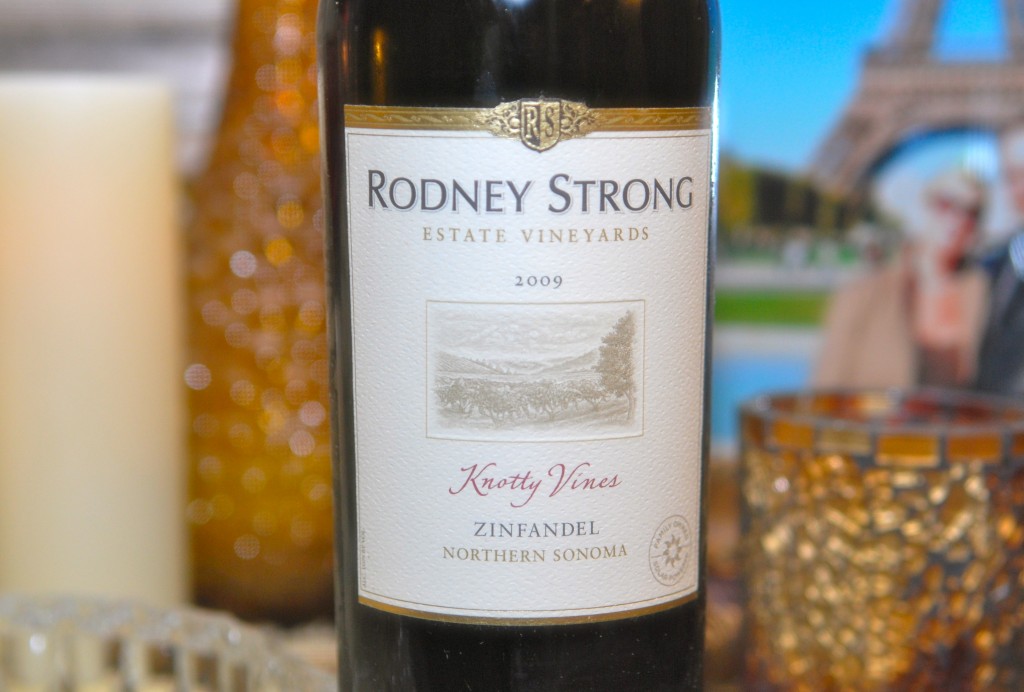 First we taste the Rodney Strong Knotty Vines 2009 Zinfandel, as well as paired it with some grilled hamburgers. Spending 16 months in a mixture of French and American oak barrels, this $18.50 zinfandel displays a bouquet of red berries such as red raspberry and even dark cherry, while the palate offers bright red berry fruit, raspberry on the front, with the flavor getting darker on the mid palate and the finish. There are notes of black pepper on the back end, and the wine has good California fruit, and is big and powerful without being overblown. It’s a perfect wine for a bbq, whether ribs or burgers, and we had to struggle not to finish it with our meal, for the upcoming chocolate tasting. 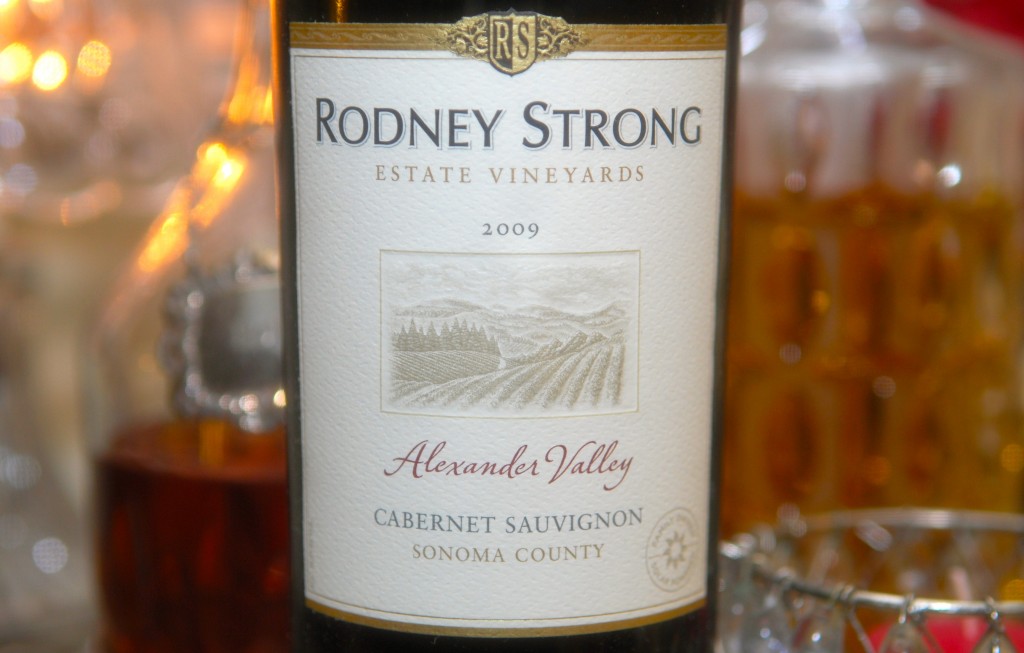 Next we taste the Rodney Strong Alexander Valley 2009 cabernet sauvignon, a $25 bottle of California wine. A full bodied red, the nose shows fresh dark cherry, ceder and baking spice. The palate opens nicely, showing more fruit than wood and spice, while retaining a nice firm tannin structure. With the burger, the California fruitiness of this wine tones down, and the earthy leather notes really show through on the mid and finish. It works nicely with or without food, and I was able to enjoy a glass up to three days after it was opened. It retained it’s fruitiness, while still having integrated tannins lending body to the wine. 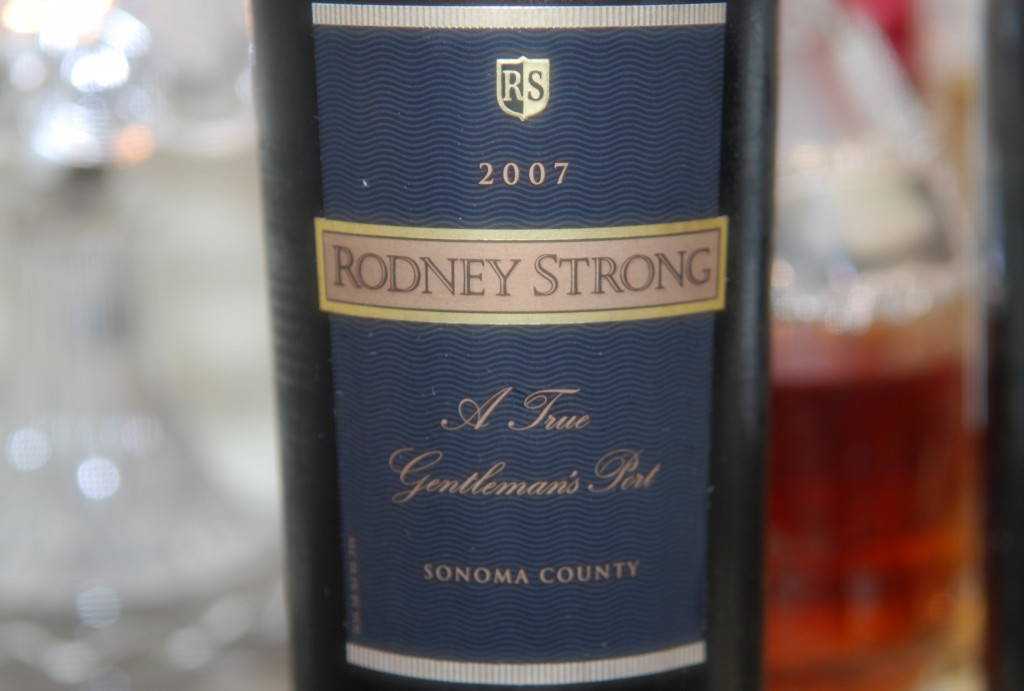 Finally we taste Rodney Strong 2007 A True Gentleman’s Port, from Sonoma County. A blend of 39% zinfandel, 30% touriga, 16% malbec, and 15% syrah, this wine is aged 40 months in neutral oak, after being fermented on the skins. This is a very limited release wine, available only to the winery’s Collector’s Circle members and at the winery itself. Without the benefit of air, the nose was hot and spicy, and the palate had a tremendous amount of power behind it, with plum, raisin and spice notes. However, on the second day, the Rodney Strong A True Gentleman’s Port opened to a big, full, round and silky palate, with flavors of dark chocolate, raisin, plum and fig.  There was fine spice on the finish, and it lingers quite a while.  The nose on the third day is dominated by chocolate, and the palate is even rounder, softer, more integrated, like a plum and raisin dark chocolate bar, instead of individual notes. For $30, it’s a very nice way to end a meal. 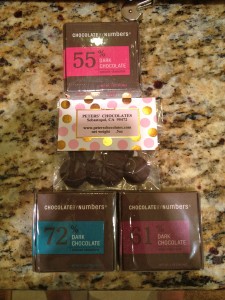 Dark Chocolate to taste with wine

Now that we’ve taste the wines, how does the chocolate factor in? First, we had five different chocolates to try, including some 72% cocoa bits from Peters’ Chocolates from Sebastopol, CA, as well as 55%, 61% and 72% cocoa dark chocolate from Chocolate By Numbers. I also added a little Brix chocolate later on, which is supposidly chocolate made especially to pair with wine. We’ll cover that after the cover the first four chocolates.

Frankly, I’m still not a dark chocolate fan, and still don’t like chocolate with my wines. I found pairing 72% dark chocolate from Peters’ Chocolates with the Rodney Strong Port was my favorite pairing of the night.  The wine took some of the heat out of the finish, and brought out the chocolate notes in the wine, of course. However, there were tons of oohs and ahhs about the pairings, with other wine writers loving the different wines with different levels of cocoa. Everyone’s palate is different, and there are different sensitivities to sweet, salty, and sour. So don’t let my preferences influence yours too much. You can try some Rodney Strong wines and chocolate and attend the Wine & Chocolate event Feb 4, 2012 at the winery, and form your own opinion. 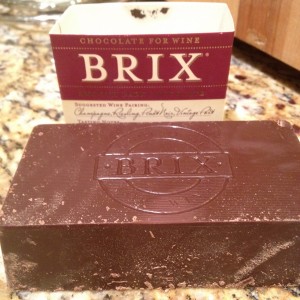 Back to the Brix Chocolate. The Brix was 54% cacoa and surprised me in terms of taste, in a positive way. Supposedly made with pairing wine in mind, Brix chocolate claims to pair well with Champagne, Riesling, Pinot Noir and Vintage port. At $10 for 8 ounces, it’s about double the price of a bag of Dove chocolate, which you can get in the grocery store. While I felt it was pretty good chocolate, and I felt it paired really well it with port, I’d have a hard time recommending you buy it just because it pairs with wine.  I’ve not paired it with anything other than port, and have a bottle of Prosecco that I’ll try it with later this week!

All of these wines, and chocolates, were provided as samples to taste and discuss honestly with you. Nothing affects my opinion of the wines or products I write about, not even getting them as free samples.