Don’t we all wish we could take what we are passionate about as a hobby, and turn it into a business? That’s just what entrepreneurs Tim Perr and Scott Knight did in 2005; they founded a winery that was focused on producing small lots of pinot noir that they loved to drink. Named Pali Wine Company, after their home town of Pacific Palisades, they set out to focus on producing wines that represent the areas in which the grapes are grown, as well as being varietally correct. I was sent samples of their Riviera Pinot Noir from Sonoma Coast, CA and Alphabets Pinot Noir from Willamette Valley, OR, and they’re doing something right.

I’ve written about pinot noir a few times, and I love the various expressions you’ll find. The red wine can show flavors that range from ripe fresh fruit of strawberries to earthy and organic, and everything in between.  It’s found in both the New World and Old World, and is quite a food friendly wine.  It can be found in nearly every wine growing region, including France, New Zealand, Chile and of course, the US.  Pinot Noir is often a red wine I recommend to people who are looking to dip a toe in the red wine world, as it’s often soft and approachable, and an enjoyable glass. 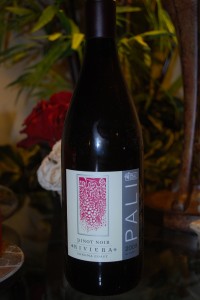 The Pali Wine Co Riviera Pinot Noir 2009 bears the Sonoma Coast appellation on the label. This means that the grapes are not sourced from any specific vineyard, but rather from one more more sources within the Sonoma Coast AVA. This allows Pali to change it’s suppliers, should the grapes not be up to standards from one or another vineyard. As soon as it was uncorked and poured, the nose was chocolate covered strawberries, with some spice notes as well.  The palate was light, and bursting with fruit. Round and easy to approach, there were cherry flavors, and were almost reminiscent of the cherry cough drops you’d eat by the pack, cough or not.  After airing for about thirty minutes, the palate was still quite similar. It was perhaps a bit heavier, and showed a bit of tannin I didn’t previously notice.

The tannin could be a function of  aging 10 months in barrels, 20% of which is new French oak. It didn’t have gripping tannins, but some where noticeable. The Riviera pinot noir is not an over the top fruit bomb, and not terribly high alcohol, clocking in at 14.5% ABV. However, it’s round, fruit forward profile made this an easy sipper. While certainly a round, California red, the Pali Riviera Pinot Noir will make a good food wine. The acidity isn’t racing, but it’s somewhat noticeable. I think it played nicely with a bit of grilled Italian sausage and hamburger, and wouldn’t hesitate to pair it with a variety of foods.

A quick hour flight north of Sonoma takes us to Oregon, where we visit the renown Willamette Valley wine country. I was indeed fortunate enough to visit Oregon in May 2010, and enjoy some fantastic Willamette Valley and Dundee Hills pinot noir, including J Christopher, Cameron, and Ponzi. Oregon produces some world class pinot noir, and has been compared to Burgundian pinot noir time and time again. Burgundy, of course, largely produces old world pinot noir, where the flavors are more earthy, organic, and less fruit driven. While not a RULE, it’s indeed the case that many of the wines I’ve been enjoying from Oregon are made in this old world style. I believe that the Pali Wine Co Alphabets 2009 Pinot Noir is indeed ones of these wines. 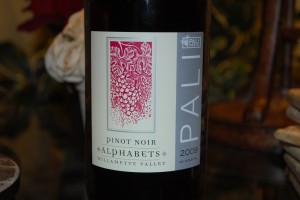 The nose of the Pali Wine Co Alphabets 2009 opens up as bright raspberry and strawberry, and is very intense. While also aged in 20% new French oak for 10 months, and made from pinot noir grapes, that’s where the similarities with the Riviera end. The palate, right out of the bottle without any air, is medium, with lighter fruit notes. With thirty minutes decanting, the nose is still strawberry, but a bit darker, if you can imagine that. The palate, however, is much darker, and the fruit as “blown off”, leaving a very earthy, organic flavor that is mushroom like. The terroir, or earth where the grapes were grown, really shows in this wine. It’s markedly different from its fruit forward, approachable cousin. While still easily enjoyed, the Alphabets seems a bit more of a food wine than the Riviera. It definitely liked the hamburger and Italian sausages I made on the grill, and even brought out some of the fruit when sipped after a bite.

What I enjoy most about these wines was the price. At $19 each, they’re an affordable way to sample two distinct styles of the same grape, and from the same wine company. You can order Pali Wines Pinot Noir online, or ask your local wine retailer to order them for you. If you have had them, or have them in the future, I’d love to know your thoughts.