As a wine writer, it is sometimes difficult to know exactly what your audience will want to read. Do they want to know about wines that are fruity, jammy and just easy to drink? Do they want to know about complex wines that have multiple layers of flavors or perhaps need food to be enjoyed? One thing I know, almost everyone drinking wine is focused on its quality to price ratio or QPR. I recently participated in an event that allowed me to taste some wines from Chile, typically known for it’s QPR wines. These wines ranged from $15 to $50, which may push the envelope for QPR wines, but they definitely were worth trying.

In the fourth such event, the PR folks from Wines of Chile sent eight wines, this time blends of different red grapes, to sample and write about. Over 40 wine writers had the opportunity to join Master Sommelier Fred Dexheimer as he moderated a video conference with the eight Chilean winemakers in Santiago, Chile. We had an absolute blast not only talking, but also joking with the winemakers to learn about them and their masterfully made wines. We had a fun time sipping and tweeting, and now writing about wines I’m excited to share with you.

The first wine of the evening was the Valdivieso Vineyard 2005 Eclat, from the Maule Valley. A blend of 56% Carignan, 24% Mourvedre and 20% Syrah, this wine retails for about $27. The winemaker, Brett Jackson, was one of the only non-Chilean wine makers at the video conference, as he hails from New Zealand. The wine’s bouquet was bursting with lush red berries, fresh, and was very inviting. The palate was full and silky, with more earthy and spicy notes than the nose eludes to. It was the lightest of the eight wines, though full bodied, and even though it was aged 12 months in French Oak Barrels, the oak flavors were well integrated in the wine. I loved that Carignan was the predominant grape in this blend, as it’s often a subordinate blending grape. Carignan lends this wine it’s deep ruby coloring, and is typically high in acidity, making it a great food wine. You can throw a steak at this wine, and enjoy, though the winemaker recommends soft meats such as lamb, turkey, fish, or lightly sauced pasta. 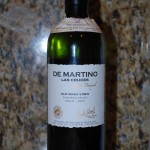 The next red blend wine comes from the De Martino winery, founded in 1934 in Isla de Maipo, Chile. The blend of 66% Malbec and 34% Carmenere comes from a single vineyard planted in 1957 in the Cachapoal valley. While Malbec is a grape most associated with Argentina, Chile’s neighbor on the other side of the mountains, I’ve seen some great offerings from Chile. Wine Maker Marcelo Retamal has been with De Martino since 1996, and is very focused on the Terrior, or the location to grow the right grapes. The wine’s nose has a fantastic mint component, while the palate was a silky smooth symphony of great, dark flavors, subtle fruit and sweet spices. No flavor competes with another, and they work beautifully together. I found this wine very easy to sip on, and it worked nicely with the steak I had that evening. The winemaker suggests pairing this wine hearty dishes such as lamb or venison. The De Martino Single Vineyard Old Bush Vines “Las Cruces” 2006 retails for about $45, and while not an inexpensive wine, I thought it was a wine worth trying at the price. 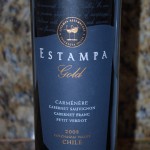 Our third red blend of the evening was the Estampa Gold Assemblage Carmenere 2008, from Colchagua Valley, Chile. A blend of 57% Carmenere, 23% Cabernet Sauvignon, 12% Cabernet Franc and 8% Petit Verdot, this dry red wine worked best with food. Winemaker Ricardo Baettig has been with Estampa since 2004, and his wines have earned quite a few awards. I noticed the nose, which was sweet red fruits reminding me of Hubba Bubba bubble gum with some woody brambles underneath, was nothing like the palate. The palate was very earthy, with tobacco and leather coming through. The wine was very typical Carmenere, which is a favorite varietal of mine, and was quite dry. The Estampa Gold Assemblage Carmenere retails for about $22. 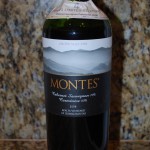 While the Montes Limited Selection Cabernet Sauvignon Carmenere 2008 was the most inexpensive wine of the evening, it’s price was certainly not indicative of quality. Montes makes a number of different wines at different quality and price levels, and I’ve enjoyed many of them. Winemaker Aurelio Montes Del Campo joined the winery in 2007, and has a history of making premium wines in Chile. This 2008 Montes Limited Selection is 70% Cabernet Sauvignon and 30% Camenere, and was aged in American oak for 6 months. The nose may be a bit awkward for some, and I can only describe it as a barnyard smell, but in a sexy way. Think earthy, organic scents, almost primal in nature. Pair that with the palate of great earthiness, amazing spices, and subdued fruit, and you’ve got a very interesting wine at $15. One of the interesting notes of the tasting, Montes plays classical music in the barrel aging room 24 hours a day, 7 days a week, and practices Feng Shui. Whatever they’re doing, I think it’s working!

I’ve got four more wines to discuss, but I’ll save them for tomorrows post. I’m curious if you’ve had any of these Chilean wines before, and if so, your thoughts. If not these Chilean wines, how about sharing the last Chilean wine you had, even if it wasn’t a red blend! I’d LOVE to hear from you!