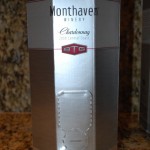 Years of poor quality wine in cardboard boxes have made even the most frugal wine shopper pass them by. However, recent quality improvements as well as a focus on “greener” delivery methods have brought the box back to bearable. With Memorial Day just a few weeks away, in the short video below, I bring four options to CBS12 and chat with Kara Kostanich about them.

In the video I talk about

My next post will talk about each of the wines in a little more detail. Be sure to come back and see what I have to say about the Double Dog Dare and Monthaven box wines, which were purchased from Total Wine and More here in Florida..