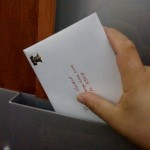 A Card For Barbara

I will never forget the day Michele Northrup sent the tweet that her mom saw me on Daytime, and said she was my biggest fan. I nearly cried, thinking that someone not only saw me on television, but would consider themselves a fan. I love what I get to do on TV, whether on Daytime, on CBS12, or any of the other stations I’ve appeared on in the past year. I want to help everyone feel more comfortable about selecting wines, and it’s just plain fun. When I later learned that Barbara, Michele’s mom, was dealing with Cancer – her being a fan became even more special.

Cancer sucks, and I know all too many people who are dealing with it. Some are survivors multiple times, like Alicia, others are battling it their first time and are going to beat it! My little niece, who’s four, has Leukemia, and it reminds me all the time that, well, Cancer sucks. However, this post is about Barbara. See, the other day Michele sent me a tweet saying thoughts and prayers were needed for my biggest fan in Tampa, and my heart about stopped.

Barbara is fighting hard, but the chemo is wearing her down. She’s feeling a little out of sorts, not herself. My mind raced for what to do, and the quickest thing that came to mind was sending her a card. So, Michele gave me her address, and I sent her a card letting her know I’m thinking about her. I signed it Matthew Horbund, Wine Guy from Daytime. I don’t really refer to myself as that, but I hope it helps Barbara feel a little better. I dropped it in the mail this morning, and I hope she gets to read it tomorrow. I won’t be in Tampa until June or July, but I plan on seeing Barbara then, and giving her a huge hug. I can’t wait to meet my biggest fan.

What does this post have to do with wine? Everything. If it wasn’t for wine, I wouldn’t have met some of the most amazing people in this world. I wouldn’t have been given the chance to be on television, and I wouldn’t be sitting here, crying, thinking about my biggest fan, Barbara. Tonight I’ll open a bottle or three of wine, as my sister is visiting us from DC. And each cork that pops, I’ll be thinking about you, Barbara! I’m your biggest fan!