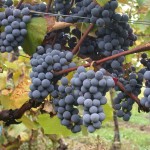 The Gamay grape has a history dating back to approximately 1360, and it is thought to have first appeared in the Village of Gamay, it’s namesake. It’s nearly synonymous with Beaujolais, the AOC (Appellation d’Origine Contrôlée) in which it is most abundantly produced. What does all that mean? Well, The short two minute video here tries to explain a little bit about the grape, the styles of wine you can expect from Gamay grapes, and the main geography it is produced in.

There are several regions, or appellations, of Beaujolais, and each produces a different style and quality of wine made from Gamay grapes. The Beaujolais AOC is considered the first quality tier, and is likely what you think of when you have Beaujolais Nouveau each November. Beaujolais wines are meant to drink soon after bottling, and are typically fruit forward and easy drinking. They also, perhaps, have a bad reputation of being too simple and barely a step up from sweetened fruit juice. While masterful marketing in the 1980s has made Beaujolais Nouveau a wine people anticipate each year, it has also perhaps hurt the reputation of a grape that could produce great wines.

The next step up in quality is Beaujolais-Villages (Vill-ah-zche). While the wines produced here are also meant to be consumed young, like Beaujolais, they typically have lower yields, or smaller crops, which in turn produce more intense grapes and a smaller amount of more intense wines. There is not, typically, a tremendous price difference between wines from Beaujolais vineyards versus Beaujolais-Villages, and trying wines from each area will help understand the differences and similarities.

Finally, there are the ten Cru Beaujolais regions, each with it’s own characteristics that are imparted upon the wine, and can be broken into three categories. The Cru’s that make the lightest style of wine includes Brouilly, the largest Cru, Regnie, which was upgraded from a Beajolais-Villages are in 1988, and Chiroubles. The Cru Beaujolais producing medium bodied wine, which some experts recommend at least a year of bottle aging before approaching, include Cote de Brouilly, Fleuire, and Saint-Amour. Finally, the four Cru’s that typically produce the fullest bodied wines are Chenas, Juliénas, Morgon, and Moulin-a-Vent.It’s difficult to summarize each of the Cru’s, so I’ll expand on them in future posts.

Now you have an opportunity to add your thoughts! While I mentioned cheeses like Munster, Emmental, and Brie, as well as chicken or turkey, I barely covered foods that pair well with Gamay, or Beaujolais. What are some of your favorite food and Gamay wine pairings? After watching the video and reading the post, leave a comment below. I’m curious your take on Gamay, Beaujolais, and related topics.