The video has all the information about making the grilled buffalo burger, as well as the tasting notes on the wine. Let me know what you think of it, by leaving a comment below, or rating it on YouTube!

What are we drinking?

I’ve made a lot of great friends on Twitter, and quite a few have asked for food and wine pairing advice. I recently started collaborating with Robyn Medlin from Grill Grrrl, a website all about grilling some fantastic meals. We’ve discussed quite a few projects, which we’ll be rolling them out to you in the next few weeks. Robyn and I got on the topic of her grilled buffalo burgers, and I decided to make them for lunch and pair with a nice shiraz, the 2007 Vinaceous Snake Charmer.

Where does the wine come from? 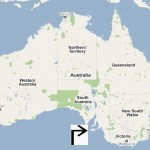 McLaren Vale, one of Australia’s renowned wine regions, is located in Southern Australia. It’s famous for Shiraz, which accounts for 50% or more of it’s production annually. Vinaceous does not have it’s own vineyards, but rather sources it’s fruit from various vineyards in the area.

The video has all of the tasting notes you’ll need, but there’s definitely some nice berry fruit coupled with a great peppery finish. It’s a wine that changed from the time I opened it, until we finished the meal. I preferred it after 20 to 30 minutes of air, as you’ll see in the video.

What to pair it with?

If you saw my short writeup about the Syrah/Shiraz grape, you’ve seen some of the things that can pair with the Vinaceous Snake Charmer Shiraz. Grilled meats, whether lamb, beef, sausage, or obviously buffalo, are a natural food and Shiraz wine pairing. It does well with aged and hard cheeses such as Gouda and Parmesan.

Coming in at around $20, the Vinaceous Snake Charmer 2007 Shiraz is everything you’d expect from a McLaren Vale wine. Big fruit flavors with an aggressive pepper finish out of the bottle, it mellows nicely with air, and compliments almost anything you throw on the grill. However, don’t take my word for it! Grab a bottle of the Snake Charmer, pop the .. screw top .. and come back and comment on it below! And as always, Cheers!