Though I didn’t make many resolutions this year, one of my goals is to finish my journey into the Wine Century Club, as each member has drank 100 different wine varietals. I started logging the wines I drank, cataloging each different grape the wines were made from, back in October 2008. Sadly, I stopped recording names and just focused on reviewing, writing, and discussing them. I have 50 written down so far, so there’s only another 50 to go. While I won’t blog about each grape I try, I may mention them, such as the Greek wine made from the Assyrtiko grape I had at the Epcot Food & Wine festival. I hope you come with me on the journey, and discover new and fun wines with me.

Today’s video review talks about two wines I enjoy very much, Albarino and Carmenere. I discussed both of these wines on Daybreak, the local CBS weekend morning show. They went over very well, and everyone in the studio agreed they NEVER would have tried the wines without my help. 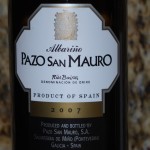 The first wine, Pazo San Mauro’s Albarino, hails from the Riax Baixas region of Spain.  In the heart of Galicia, Rias Baixas is in the northwest corner of Spain,  and 90% of the wine from the region is made from Albarino. Albarino often has a nose, or bouquet, of stone fruits such as apricots and peaches. However, this Albarino, and others I’ve had, has aromas of citrus and floral, and is a very inviting nose. The palate, or taste, is very similar to the nose, with tremendous citrus flavors and floral notes. The grape itself has very thick skins, and the pips, or seeds, and skins can impart a bitter flavor into the wine, though this one didn’t have much bitterness to it.

The Pazo San Mauro estate is approximately 300,000 square meters, with grape vines that range in age from 9 to 34 years old.   The wine was fermented in stainless steel tanks, and approximately 140,000 bottles were produced. It cost approximately $19, and you can see what foods I recommend to pair in the video review.

Pazo San Mauro’s Albarino was rated 89 point by Robert Paker, and has a tremendous amount of crisp citrus on it, showing a bit more grapefruit than orange, lemon or lime than I’ve found in other Albarinos. The wine also has very sharp acidity, balancing out the fruit and floral flavors nicely, in my opinion. Albarino is a fun white wine, crisp and refreshing. It’s a great alternative to Sauvignon Blanc, and quite different from Chardonnay. I certainly hope you step outside of your wine comfort zone, and give it a try! If you do, let me know what you think! 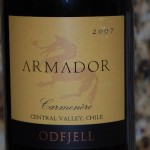 Next we tried one of my favorite red wines, a Carmenere from Chile. As I mentioned in the video, Carmenere was originally a grape planed in Bordeaux. France’s cold weather was not ideal for the grape and the phylloxera plague of 1867 wiped it out nearly completely from the country’s vineyards. However, the grape made it’s way to Chile, where it thrives today.

I’ve had the opportunity to try a number of Chilean wines, and have found they offer great wines at great values. This one, Odjfell’s Armador 2007 Carmenere is no exception.  The first time I had this wine, I was not a fan of it, and when it came a second time in a sample pack for a Wines of Chile event, I almost gave it away. I’m quite glad I didn’t, because it’s become one of my favorite red wines.

Carmenere typically has nice red fruit flavors, cherry and berry, that are often balanced with a lovely spice laden finish.  The tannins, the astringent, bitter plant polyphenols that cause your mouth to dry and pucker with some wines, are more mild than a Cabernet Sauvignon, but still add nice structure to the wine.  The grape is similar to Merlot, in both look and growing pattern. Merlot ripens a few weeks before Carmenere, however, and if the Carmenere is harvest too early, it develops some flaws. The flaw, which some just expect in Carmenere, is a bell pepper note on the palate and nose. When the grape is harvest too early, that bell pepper comes through in the wine, which is unpleasant to some, enjoyed by others.

Odjfell’s Carmenere, the 2007 vintage from their Armador line of wines, is quite enjoyable. Equal amounts of the grapes for this wine come from both the Maipo Valley and Colchagua Valley, from vines that are 10 to 20 years old. On the palate, the wine is smooth, though not “silky”, as it’s only slightly filtered, which leaves the mouth feel a bit rustic. Only 30% of the wine is aged in two to five year old oak barrels, for only three to five months, the rest is in stainless steel tanks.  This gives the fruit a chance to shine, while still adding a light cedar component and spice from the aging.  Cherry and berry comes through, rounded by the cedar and spice on the finish, making this a great wine for about $12. As with the Albarino, I talk about food pairings with this wine in the above video.

I purchased these wines from Zsazsa and Company, Inc, an inline wine store serving Florida. The Odjfell Carmenere is only $12, and the Pazo San Mauro Albarino is only $18.49.  I hope you enjoy.  If you’ve had an Albarino or Carmenere recently, let me know which one. If I haven’t tried it, I certainly will do my best.  Cheers!