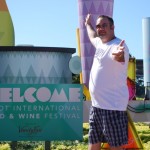 We always have a good time at the Disney parks, whether with the kids, or with our adult friends. Robin & I decided it was time for an “Adult Weekend”, and planned a trip to the Epcot Food and Wine festival with our good friends Tom and Scottt. As Florida residents, the discounts available to us make it a quick and usually relatively inexpensive weekend getaway. We were all very excited to try some different wines as well as interesting food creations, and just have a Magical day.

We arrived on Disney property Friday evening and made our way to the Grand Floridan for our dinner reservation at Citricos. The bartender at the hotel bar on the second floor, Tammy, is not only fun and a great mixologist, she’s a good friend of Tom and Scott. We were excited that Tammy was working, and stopped to have a drink with her. The first non-magical moment happened when Tom went into Citricos to tell them where we were, as the host was quite rude. He wouldn’t call us if we were not in the restaurant bar, and we’d just have to wait for a table after we came in. Mind you, they were anything but full, and this is certainly NOT the way we expected to be treated. Fast forward through the evening, and the food was nice enough, but our waiter and the service were terrible. The appetizer and salad was delicious, and the Albarino they suggested was nice with those courses. Our main course was served late, and only after we walked up to the kitchen and saw it sitting on the counter. The food was cold, and while probably delicious, the meal was positively ruined. Even the tasty bottle of Chappellet 2006 Mountain Cuvee couldn’t save the cold fillet of beef, roasted chicken, or lamb shank we had. It was a several hundred dollar dinner that was truly terrible. We’ll never eat at the Grand Floridian’s Citricos again. We left unsatisfied, though we all looked forward to our next day in Epcot. 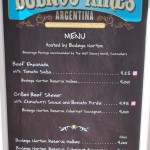 After a great breakfast at the Yacht Club, we arrived at Epcot for 10am and walked around a bit. When you enter the World Showcase, which is a circular track, you can go left or right. We decided to go left, where the first stop was the Desserts & Champagne stand. This was poor planning on Epcot’s part, in my opinion, as having sweets before much of the wine throughout the rest of the event would tend to make the wine taste off. Perhaps they think everyone will go to the right, and finish with this stand. We did have a glass of Moet Imperial Rose each, then made our way to the next stand. We passed on Brazil, since we still had Champagne, and made our way to Argentina. I have recently done three different wine tastings of Argentinian wines, and was excited to stop at this stand. We sat for a while and finished our Champagne, then tried the Bodega Norton Reserva Malbec and Torrontes.

The Torrontes had a beautiful floral bouquet, and a nice, crisp palate of citrus and flowers. While I felt it left a waxy feel in my mouth, like eating wax lips when you were a kid, no one else minded, though they did experience it. The Malbec, which is a varietal that I do enjoy, was over oaked and had no spice or pepper. We did not eat the food pairings, but they both looked fantastic, and we heard reviews later from a chef that it was the best food in the event. 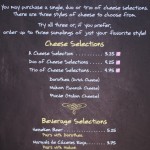 Across from Argentina was the Mouse Catch. This was a cheese stand hosted by igourmet.com. I’ve had their products before and think they offer some spectacular cheeses. I was a bit let down that we had just eaten breakfast and were too full to try any of the cheese. I thought we’d make our way around the event and try them later, though in the end that didn’t happen.

We took a break to ride Soarin’, and upon our return to the World Showcase, we went to the right this time, passing on “mojitos” from Puerto Rico, and stopping at Chile. The Natura Sauvignon Blanc was our selection, and probably would have rocked with the Corn & Cheese Arapa or the Ceviche. We were still full and not eating, but everyone loved the wine. Our next stop, Greece, was an interesting one. I have had a few people tell me they weren’t fans of wines from Greece. However, since I had never had any, I felt it was time to give it a shot, and move further along the road towards the Wine Century Club! 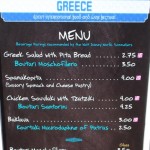 I can now say I’ve tasted Boutari’s white wine from the Santorini region, made from Assyrtiko grapes, as well as Tsantali’s Rapsani Reserve, a red wine. The Boutari Santorini had a bouquet of motor oil and gasoline, and the palate wasn’t much different. None of us could handle more than 2 sips of the wine. The company’s website describes it as having a metallic taste, and I’d agree. The Rapsani Reserve is made from Greek indigenous grapes of 34% Xinomavro, 33% Krassato and 33% Stavroto. It was aged for 12 months in new French oak, and showed on the palate which was mostly blackcurrant and wood. This red would have probably paired well with some nice Roast Lamb, but alone, it wasn’t to my liking. The food offerings looked great, but it was now approaching time for our lunch in France, so we passed.

The highlight of the visit was lunch at Les chefs de France. It is, of course, an every day option at Epcot, so I really can’t give this fabulous experience any weight when discussing my Food & Wine Festival experience. We started with a glass of Pommery Brut Royal Champagne, and selected the cheese plate, meat & pate plate, and escargot to share. The bottle of wine we ordered, the Pierre Sparr Pinot Gris, was not one of their “regular menu selections”, and apparently was not kept at cellar temperature. We had to wait a good 20 minutes for it to be chilled enough to serve, so we ordered a glass of Domaine Caseneuve Cotes de Provence Rose. It was a lovely dry rose, with delicious cherries and citrus balanced nicely with chalky notes that paired well with the meats and cheeses. When the Pinot Gris was finally ready, it rounded out a great lunch. Delicious ripe fruit on the palate, off dry, the fruit was so bright it almost came across sweet. However, the wine was nice and crisp, and was sipped with abandon. 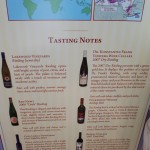 After lunch we shopped a little in France, then made our way around the rest of the event area. By 3:15pm the park was packed and each area had a queue of 20-30 people deep. None of the remaining wines really intrigued us enough to prompt us to wait that long. I was quite surprised that Australia showed Rosemont and Penfolds Kunga Hill, grocery store wines that really don’t showcase the variety and strength of the wines of the region. New Zealand and South Africa were also lack luster with their offerings. We would have stopped at Germany, which offered Prum Rieslings, but waiting 20-30 minutes for a 2 oz taste in 88 degree weather didn’t seem appealing. Likewise, we would have stopped in New York, where they had several of the Finger Lake wines I have had in the past, had there not been so many people in line. Add to this the fact that people were more than happy, some falling down drunk, and it just soured us on the rest of the day.

We left the park, headed over to Cat Cora’s new restaurant. They didn’t change the decor much at all from Spoodles, save for opening up the kitchen area. There is no bar, and the drinks the waiter brought, which he most likely made, were terrible. We had appetizers, the spanakopita which was amazing, the clam appetizer we all thought was fairly nice, and the calamari that was inedible. We didn’t even consider staying for a meal, with the noise level approaching headache producing, and the food really not Iron Chef quality. We headed over to The Swan hotel and Todd English’s BlueZoo. There, we ordered oysters and the crab nachos, which absolutely ROCKED, and hung out with Deb, a great bartender, for a few hours. We had a great time, and will most likely stay at the Swan next visit. 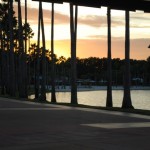 Sunset at The Swan at Walt Disney World

As the sun set on our quick visit to Epcot, we recapped our trip. First of all, wear sensible shoes. My feet are killing me from the flip flops I wore. Ladies, don’t wear heels. You may look fabulous, but you’ll cry for weeks about blisters. Wear sneakers & cushy socks. Second, plan more than one day to take in an event as big as the Food & Wine Festival. Frankly, we missed things we wanted to try, and had no time for shopping. Though as a Wineaux, I was terribly disappointed with the majority of the wine offerings, I still would have liked to experience some of them, and try the food pairings. That brings us to third, don’t eat a big meal before an event that showcases a lot of food. You won’t want any, and then lament you didn’t try more. Fourth, the one day park rate is absurd, as it cost us $80 per person to enter the park, then another $50 tasting 10 wines. Had we tried the related food pairings, it would have bumped the price another $50 per person. That’s only tasting one wine and one food pairing at 10 out of over 25 opportunities. Don’t think this is a cheap proposition. You may have a lot of different wine and food presented to you, but that doesn’t mean it’s a budget trip. I may have opened this post saying Disney is typically a quick and inexpensive getaway as a Florida resident, but this event really doesn’t fit that bill.

Finally, you’ll notice I didn’t mention any of the seminars available to you at these events. After this unflattering review of the cheese seminar, coupled with the fact that on the day we arrived, nothing really intrigued us, we passed. They didn’t seem worth the price. Perhaps someone can tell me which events they enjoyed, so we can try them next time. And that’s where I end up folks. Though Citricos was positively abysmal, and the wine at the Food & Wine festival really didn’t leave me feeling like I was trying anything special, I will probably make the pilgrimage to The House of the Mouse in a few years. Perhaps by then Disney will realize that to put on a festival showcasing wine, they should try to offer their guests something more than just $9 grocery store juice.