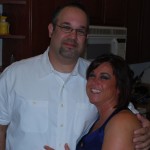 If you read my wine blog regularly, or follow me on twitter, then you know that I was ultra excited for the Italian Food & Wine Tasting that chef Debbie Frangipane and I were doing at the end of February. Not only did we plan on having decent wines, and great food, but a small crowd of 13 friends were going to join us. The idea was to showcase Debbie’s culinary skills, pair her delicious food with some wines that I picked up, and share them with some great people. Most of the folks in attendance were twitter users, so it was a grand scale Twitter Taste Live event, mixing food and wine and fun! Debbie, and her husband Barry, are an incredible couple and great friends. There are so many things that caused our universes to collide, and us to connect and become friends, but clearly Debbie’s passion for creating food, and my passion for eating it, were a big factor. I spent the night before the event at their house, getting to know them while preparing the technical aspects of the event. By technical aspects, I don’t mean setting up the cameras or lights. I mean opening some of the wine and making sure it was tasty!

While we sampled the wine, and worked on some prep for the dishes to be served the next day, we shared a bit of our history with each other. It was quite interesting to learn that even though Debbie was from Texas and spoke with quite the southern accent, she lived in Italy for a year, and speaks Italian quite well! I also learned that Barry had been a chef himself, though he’s happy to let Debbie create delicious meals for now. I also learned that Debbie acquired some of her fabulous recipes from Barry’s mother, and nothing is more delicious than recipes handed down from generation to generation. I knew we were in for a treat. 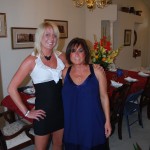 After a day of preparing for the event, we were more than excited when the first guest, Ashley V. Routon, aka @TheBeerWench, showed up at 5:30. Slowly people started to arrive, including Tampa Tribune food writer Jeff Houck (@TheStew on Twitter) and his wonderful wife Grace, personal chef Susan Leonidas (@ChefJerseyGirl on Twitter), award-winning producer, web producer and adjunct professor Jen Straw (@MissAttitude on Twitter), personal trainer and aspiring fashion designer Rebekah Reidy (@RebekahReidy on twitter), as well as Social Media maven TS_Elliott and her husband and social web strategist Mike Elliott (@MikeElliott on Twtter). We started off with some Prosecco and some introductions since this was the first face-to-face meeting for many of us. The crowd was quite engaging, which was awesome. There was definitely energy and excitement in the air. Perhaps we all just clicked, or perhaps the fact that we could tweet and use phones and laptops during a meal was the cause of the buzz. Regardless, there was definitely a bond amongst the guests.

We began the live video stream at 6pm EST. The entire stream is captured below, without any edits or review. If you weren’t able to tune in when it was live, take some time and watch it now. It’s early two hours of conversation about good food, good wine, and great people. We discuss the flavors of the wines, and how they interact with the fantastic meal that Debbie prepared. We discuss a little about each of the people at the event, which gives you a whole new perspective on them if you’re “Twitter Buds” with them. We certainly had some challenges during the video recording, including having to move the camera closer so the background noise didnt drown out the food and wine conversation. Unfortunately, that covered up the HD recording going on, so I was unable to edit and make the video more concise. The next event will be a lot better technically, and it’ll have all the excitment of being there with less static! 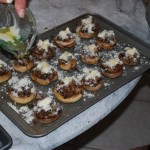 The first course was a duo of appetizers, stuffed mushrooms that were AMAZING, and spiced lamb pillows that were equally delicious. These two treats were paired with the Paolo Scavino Dolcetto D’Alba 2006. This light Italian red wine went nicely with the mushrooms, though it frankly wasn’t a perfect pair for the lamb. I would have gone with something like the Saladini Pilastri Rosso Piceno which is 70% sangiovese and 30% montepulciano. However, I digress, as the lamb appetizer was added later in the planing stage, and the wines were already set. Quite honestly Debbie’s stuffed mushrooms were the best I’ve ever had. If I wasn’t already interested in going to Italy, the possibility that Debbie would cook something this fantastic on one of their Savory Adventures tours was incentive enough to sign up!

Regarding the wine, I felt that the Dolcetto was a little light on fruit. Dolcetto can run the gamut from a sweet-ish fruit juice to bone dry and rustic, and this wine was more towards the rustic, bone dry end of the spectrum. However, given that it’s an inexpensive wine, I recommend you give it a try. If you are looking for a low-cost Italian red for pizza or pasta night, this will do nicely. And if you are the foodie type, make Debbie’s mushrooms, and let me know if you like the pairing.

The video goes through all of the courses, including the main dish of beef tenderloin braised in a Barbera wine. This was served with the Barolo, a 2003 S.Orsola that was an affordable $25 retail. Now, most of the time you can’t touch a drinkable Barolo under $50. Additionally, you typically want to give the wine a good 10 years, if not 15 or 20, to age and mature to see, and well, taste, it’s true nature. However, I was willing to go out on a limb with this inexpensive Italian red wine, and think it did nicely. If you want a taste of Barolo, and Piedmont, this wine isn’t a bad introduction. Watching the video, you’ll see Ashley and I talk quite a bit during the main course. We discuss many things, including more on the fantastic dish and the wine that went with it. 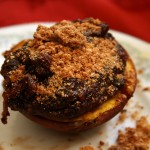 The final part of our meal was dessert, and it was outstanding. Debbie made stuffed peaches that were absolutely delicious. They were paired with a 2007 Moscato D’Asti from Paolo Scavino, and it was a smashing ending to a great meal. The peaches had a wonderful stuffing made with Amaretti cookies and amaretto, with some unsweetened cocoa that had a symphony of tastes that sang beautifully. The Moscato had a very nice floral nose, and great fruit, especially peaches, that paired very nicely with the dessert. Either of these on it’s own would be a great finish to a meal, but paired together it really capped off a memorable night.

The fun doesn’t stop here. We have already scheduled a second food and wine event in the Tampa area for April 4th. This event will be a little preview of the Savory Adventures tour to the Amalfi coast of Italy, featuring lighter fare and much different wines. The menu will be 5 courses, with 5 wines to set off each beautifully. Another fun twist to the second event, Ashley, TheBeerWench, is considering doing beer tastings to compete with the wine tastings. It should be an amazing night. I’ll be sure to let you know all the details soon!