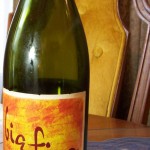 I have been really slacking with the wine review lately. Well, I’ve been slacking with typing and POSTING the reviews, but I’ve been drinking and reviewing new wines steadily for weeks. I’ve got a backlog of about 15 reviews that I’m writing up right now. However, I decided it was time to do my first ever video full wine review. I opened up a bottle of Big Fire Pinot Gris and reviewed it “live” on Seesmic.

You can expand the photo to the left and see what the bottle looks like, if you’re trying to find it in a local store. Or, just watch the below video and you’ll see what it looks like. After you watch the video, check out the supplemental review I did under the video below.

About fifteen minutes after I did the video, I poured a second glass. The color is nearly clear, with just the lightest touch of yellow to it. Pale straw would be giving it too much yellow properties, frankly. Although I had a lot of grapefruit originally, it’s more of a pink, sweet grapefruit. If you have and old Grandmother who’d take a pink grapefruit off the tree out back, sprinkle some sugar on it, and give it to you for breakfast, that’s what this is. There’s some acidity that I really didnt notice at first. It’s really a LOT more crisp that I gave it credit for at first.